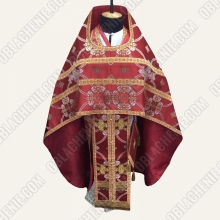 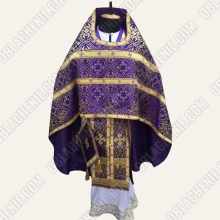 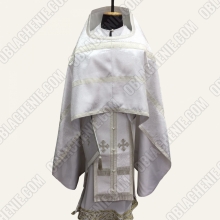 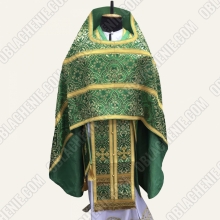 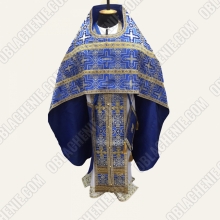 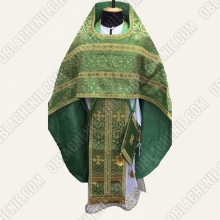 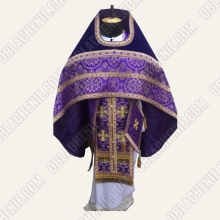 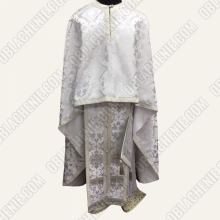 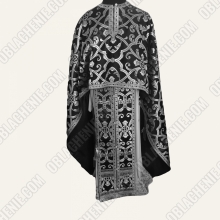 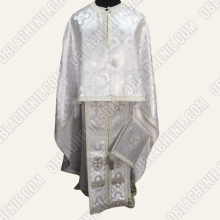 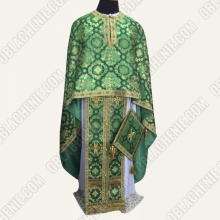 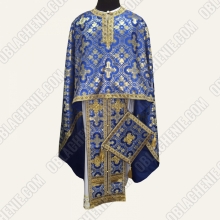 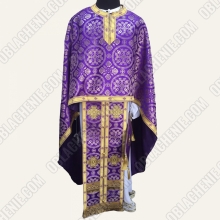 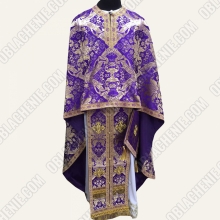 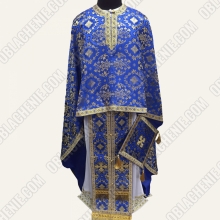 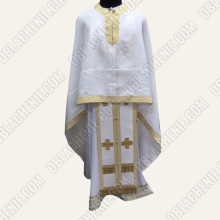 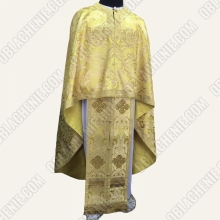 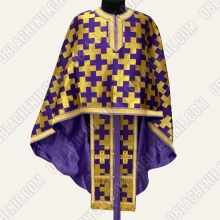 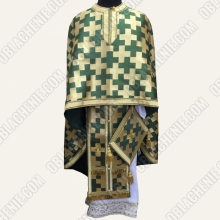 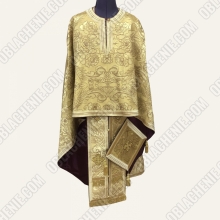 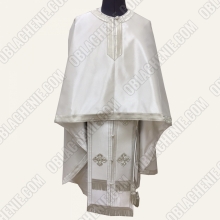 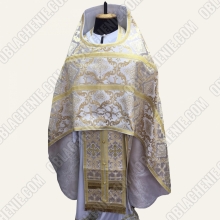 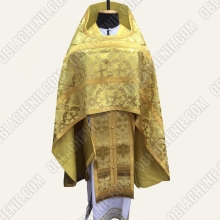 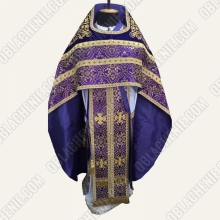 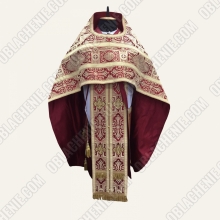 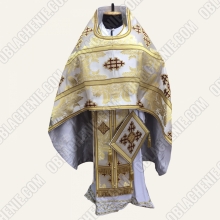 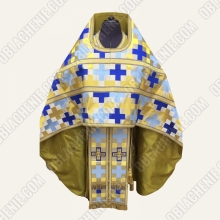 The Priest is authorized to perform divine services and all the sacraments except for the ordinance of ordination.

On this page of our shop you can find a wide range of priest's attire. This attire is an integral part of the service of an Orthodox priest.

In this section we offer you to choose and buy vestments, made of brocade or silk, intended for both festive and everyday service to the Lord.

n the catalog you can see the priests garnment made by our masters. Sewing bishop's pheloni (sakkos) is made at a high level with ornaments and embroidery.

To buy a priests vestment, you need to call us and order specific model and necessary size. We can sew any vestment of the priests robes.

Divine service bishop clothes consists of podsakkosnik, sakkos, epitrachelion, palitsa, small and great omophorion, belt, sulok, bishop's mitre, pectoral cross and panagia, staff. At solemn processions and ceremonies at the entrance to the temple a bishop's mantle with tablets is used, which is dressed on top of a robe.

Priests and bishops put handrails or armbands on the sleeves of a wannabe. Deacons put them on the wrestler's sleeves.

The handcuffs are placed on both sleeves and signify God's power, strength and wisdom that are given to His ministers for the completion of the divine ordinances. With the sign of the cross, the handcuffs signify that it is not the hands of priests that are human, but that the Lord Himself administers the sacraments through them with His divine power. This meaning of the handrail is reflected in prayers when they are put on for the service of the Liturgy.

Beginning in the 15th century, the bishops, ordaining a deacon as a priest, rounded his neck with a deacon's orator, so that both his ends evenly descended on his chest down to the hem, and were united with one another. The epiphrachylus was the garment of priests and bishops.

(The word epitrachil in Greek is male, but in Russian books it was used in female form). Now, at the consecration of the deacon to the elders, the bishop will no longer renew the orator around the neck of the initiate, but will immediately lay the ready-made epiphrachyl on him.

All divine services and trumpets can be performed by the priest only in the epiphany, which is put on top of the cassock, and at full vestment on top of the wanderer, as it always happens in the service of the Liturgy and in some special cases.

- is the outer garment for priests and bishops.

The sign of the cross is placed on the back in the upper part of phelon under the shoulder band in the same way as on the verse and for the same reasons. And at the bottom of the dorsal part of phelon, closer to the hem, on the same line with the cross is the eight-pointed star. Eight-pointed star in Christian terms means the eighth century - the advent of the kingdom of heaven, a new earth and a new sky, as the earthly history of mankind has seven periods - seven centuries. Thus, in the two short symbols - the cross and the eight-pointed star symbolize the beginning and end of the salvation of mankind in Christ Jesus. These symbols can also mean the Nativity of Christ (the star over Bethlehem) and His feat on the Cross. However, the star over Bethlehem also contains a sign of the future century, for with the coming of the Son of God in the flesh, "the kingdom of heaven is at hand". The star and the cross on phelon also signify the union in the Orthodox Church of the grace of the Old (star) priesthood and the New (cross) covenants.

Instead of many high spiritual notions, phelon in its general appearance mainly means the shining of divine glory and the fortress of divine light, clothed clergy, the garment of righteousness and spiritual joy.

Epirachyles, handrails, and phelon form a small garment in which all evening and morning services and trumpets, except the Liturgy, serve. During the service of the Divine Liturgy, as well as in individual cases provided for in the Statutes, the priest puts on a full vestment. The attire is the basis for the complete attire. On top of him consistently put on the epitrahil, handrails, belt, cavity, palisade, phelon. In this case, the leash and palisade, being awards to the clergy, may not be all priests and are not among the mandatory items of vestment.

Liturgical Priest's Vestments is for sale on oblachenie.