What is Altar Servers Robe

Altar Servers Robe (Sticharion) is a part of Christian clergy vestments in form of a long straight robe with wide sleeves. Altar servers vestments are worn by the deacon on top of the cassock. It symbolizes the garment of salvation and usually sewn of light-colored cloth.

Such vestments are known by various names: robe, cassock, stychar, stycharis, sticharion, alba. Almost all of these names referred to the common undergarments worn by men and women in ancient times. The Christian Church adopted altar servers robes as sacred, after the pattern of the priestly garments of the Old Testament, known by the name of the Chiton. Altar server robe was usually used in orthodox and catholic churches. The most widespread stycharis color was the white. One variation of the name Alba means white garment.

The altar servers cassock symbolizes the light of life, recalls the purity and chastity with which God's ministers should carry out their service, and expresses their spiritual joy for the Lord, who taught purity of life. 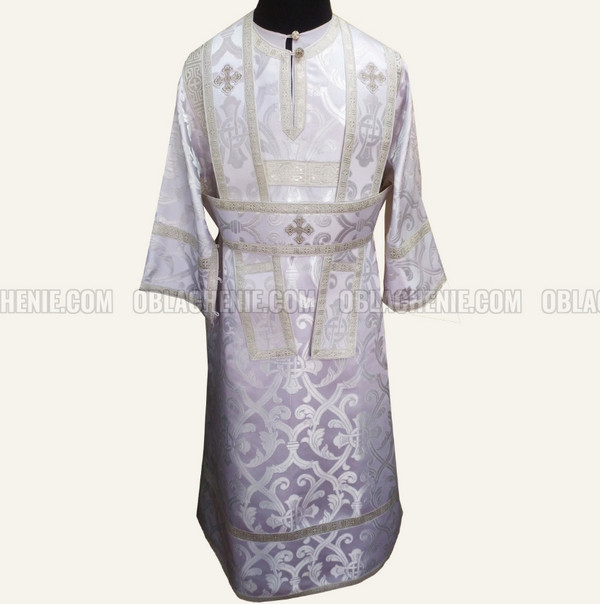 These orthodox christian robes are worn before the divine service and are blessed at the beginning of each service. For blessing the robe must be folded in a special way. It is folded twice in half in height, and the sleeves are tucked under the folding to make a square, on top of which is a cross on the back. Folded sticharion is placed on the left hand and two signs of the cross are made to the High place. After that it is necessary to come up to the serving priest, put the right hand on top of the cross with the palm up and take a blessing. After that turn to the High place, make the third sign of the cross, kiss the cross sewn on the back of the sticharion and reverently put on the robe.